I am finally getting ready to upgrade my Little Red Rover 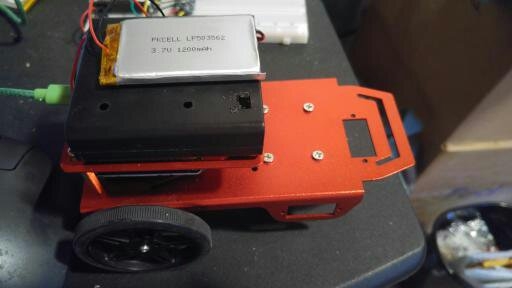 The first upgrade will be to remove the front caster and add two front motors/wheels. This will stabilize the rover and allow me to add more weight to the front.

Following that, I will test communication between a Raspberry Pi 3 and an Adafruit Feather M0 RFM69HCW Packet Radio - 868 or 915 MHz set for 915 MHz. Communication will be via the ROS (Robot Operating System) serial protocol. The Feather M0 board will be programmed to accept and send specific ROS messages. I will have two HC-SR04 Ultrasonic distance sensors connected via a level shifter to convert the 3.3V signals of the Feather M0 board to/from the 5V signals of the sensors.

I will also have a DC Motor + Stepper FeatherWing to control the four motors, and an 8-Channel PWM or Servo FeatherWing to control up to eight servos stacked on top of the Feather M0 board. Both of these FeatherWings are controlled using I2C. It would also be possible to control these FeatherWings directly from the Raspberry Pi 3, or to add the Raspberry Pi HATs directly to it. However, I have chosen to use the Feather M0 board because many sensors are just easier to deal with using an Arduino, and there are many more libraries available.

The really interesting part of all this will be accessing the RFM69HCW transceiver radio on the Feather M0 board from the Raspberry Pi 3 board. This radio will allow creating multi-point packet networks with full encryption. I will also be testing smart sensors using this Feather M0 board, which would theoretically allow my Little Red Rover to communicate with any of these over distances of up to 500 meters (about 1640 feet).

This is my current plan, assuming for now that everything works the way I need it to work.